The “chicken of the trees” 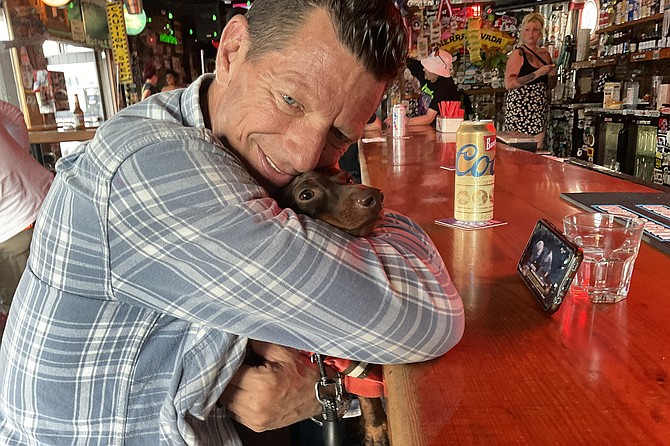 Sean with his favorite friend, Rodolfo.

It was last Tuesday, in Oceanside. I was looking for food. Don’t look for food on Tuesday afternoon. So many places are closed. Especially last Tuesday, the day the whole nation recoiled – exhausted, hungover and broken – the day after July 4th.

So this fifth of July, I walk around a little dazed. I have a few hours before the last Coaster heads south to ‘Diego at 7:36 p.m. (It’s not on the schedule, but a guard told me so.) So I might be looking for a pint of Oceanside cerveza and enough food to keep me upright. But where? I mean, Oceanside looks different every time I pass. This time, I realize that everything between Cleveland Street and the beach is new and expensive. Restaurants, bars. But where I am now, between Civic Center Drive and Mission, there are more old-fashioned restaurants – which at least see cheaper. Maybe they don’t have to deal with new landlords and higher rents.

I stop in front of this bar. Pub overlooking the pier. Beyond, at the bottom of Pier View Way, the mighty ocean wall Oceanside is next to marbling from turquoise to gray and back to turquoise, depending on the clouds and late afternoon sun- midday. When he gets the chance, the sun shines through the pub window and along the bar to illuminate Ashley the bartender’s blonde hair. His very mares blue-green eyes flash and the tropical flower tattoos that run all the way down her left arm color. 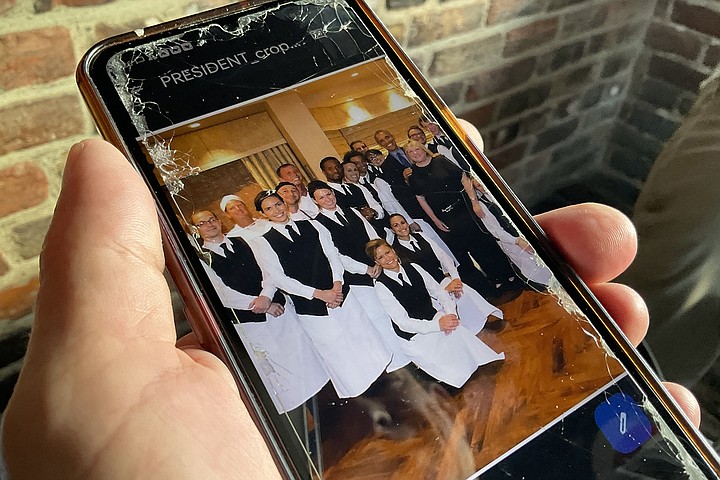 Ashley shakes her head. “Sorry. But you can bring it. Colima across the road serves good Mexican food. Just bring it. Hmm. Why not? Everything else is closed or overpriced. So hey, kid little by little we’re across Pier View Way, and it’s blowing! Colima’s one. Problem: you walk in and the place is covered in so many menu items around the walls, you need a guide and an hour. Luckily, there are people ahead of me. They’re all military, on leave from Camp Pendleton. The first guy orders a California burrito ($11.75). The second guy orders a California burrito “California,” says Rafael, the guy who looks senior here. Our most popular item. And this despite the enormous choice. Luckily they have good color pictures of almost every dish on the menu. Because now it’s my turn. I avoid burritos. I also avoid large muddy dishes that ooze all over the plate. I avoid Anglo dishes like 3 pancakes and 2 eggs, the plate of ham and eggs, or the omelet (each $12.50). I even skip the Avocado Bacon Cheeseburger, which looks like a $9.95 deal, and the Jumbo Beef Stew, which is $13.50.

No, I want all Mexican, now I’m here. And more than that: I want it Colima style. Because they say Colima has some interesting food, like its tuxpeño corn, an old Central American orange variety that tastes more salty than sweet. And iguana meat, “chicken of the trees”, because iguanas are common there. “We are all here from Colima,” says Rafael. Okay, so no iguana, but they have whole blackened tilapia for $14.50. Except I’m afraid I’ll ruin the fish by carrying it across the street to the pub and spreading it on the counter there. So, um, it’s breakfast and lunch, I’m thinking of getting a beef or chicken tamale ($3.95) to start. But instead, I break the taco ban I had imposed on myself this afternoon and opt for a crispy ground beef taco for $4.70 while I think about what’s next. Oh, what the hell are you doing: I’m asking Florentino, the cashier, the carnitas tortajust because it looks golden and fat. 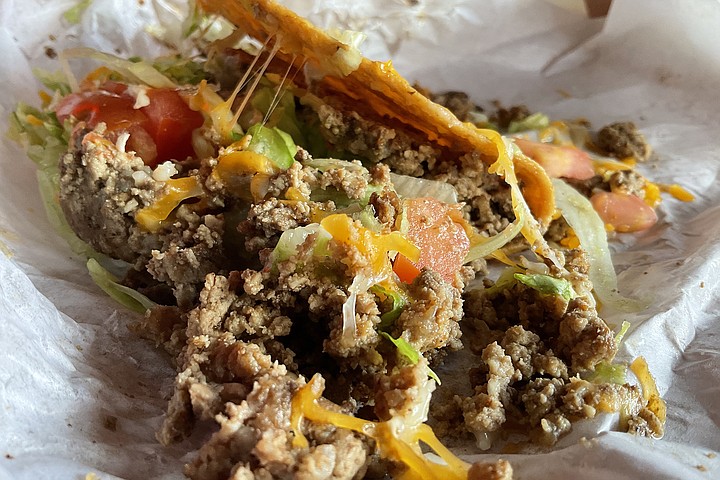 A mess, but a beautiful mess – my crispy ground beef taco.

Ten minutes later, I unload it all on the counter across the street at the Pier View Pub. I almost lose all the charge when I forget they have a big drop half way to the pub bar. “Good stop”, says this guy, Aliki. He is Tongan-American. “I’m just waiting here for my wife to come out so I can sneak home,” he said. I notice he’s sitting in front of an old sign: “Hiding From Wife Bar Phone Rates.” They start at $1 for “No, not here,” climb to $4 for “Haven’t been here all day,” and peak at $5 for “I’ve never heard of him.” Of course, in this enlightened age, they should also display “Hiding from Husband” phone rates.

Sean, the guy sitting on the other side, cuddles Rodolfo, his three-year-old dachshund. “I named him after Rudolph Valentino, the Latin lover, because all the female dogs love him,” he says. He’s a chef at a nearby restaurant, Le Citron, and has a photo of him and his kitchen team, with — hey! – President Obama! “Amazing who you meet in this business,” he says.

So the taco is a delight, but the carnitas torta really is a bomb. Big chunks of pork so marinated in a blizzard of shredded lettuce on a crispy yet tender bun. “Yes, we had to increase our prices,” Rafael told me at Colima, “but one thing we haven’t done is reduce our quantities.” I can testify to that. Now I wash my torta with a Sculpin hazy IPA ($8.50) that Ashley brought me. But even so, the thing is way too much for me. 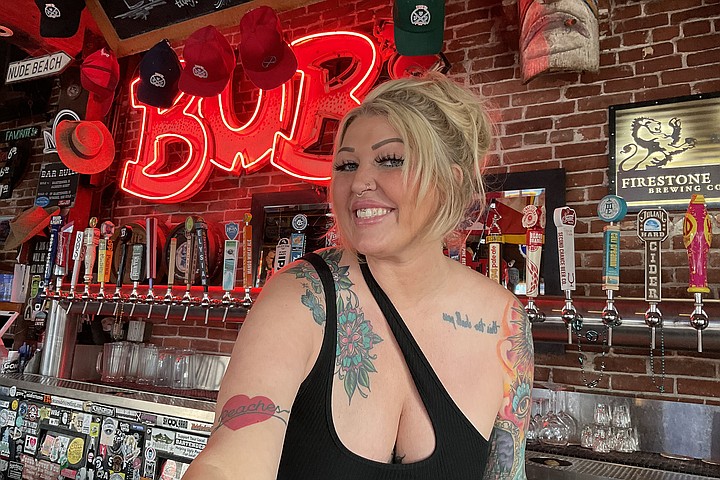 Ashley – everyone’s favorite, and the art of walking itself.

Oh man. I am looking at my watch. Gotta go south. This last train, the 7:36, leaves in fifteen minutes. I jumped. Rodolfo yelps. “Rodolfo! says Sean. “Verschliessen! Quiet!” To me he says, “She’s a smart female dog. Understands German. Also Spanish, Japanese, Korean, and now she’s learning Farsi. I swallow the last of my chabot and Billy Currington sings: “God is great, beer is good and people are crazy.” Me, I find myself going a little crazy for this old-fashioned Mex cuisine , again. Guess I’m not alone. Colima’s has half a dozen joints around town. The only thing they don’t have? All chicken from the trees.