More than 2,000 miles separate Mexico City from the Twin Cities, but you don’t have to travel south of the border to sample authentic Mexican cuisine.

“You have to try it. I would say it’s way better than other places like Teresa’s or Taco Bell,” Laura Marcin of Brooklyn Park said, referring to El Taco Riendo in Crystal.

For many years, Taco Bell is probably what came to mind when Minnesotans thought of Mexican food. Still, thanks to the likes of Miguel Cruz Gomez, you can go to places like El Taco Riendo for the real deal.

They have a wide variety of meats and sauces on hand that are freshly made daily for all taco and burrito lovers, although the menu offers so much more.

“It’s the closest thing to the original dishes from Mexico, you know,” Gomez said.

In the three years since they opened, they’re still striving to grow their clientele, but the fans they’ve established so far rave about the food.

“The portion sizes are better and I feel like the customer service here is much better than other places as well,” said Marcin, the Brooklyn Park shopper.

“El Taco Riendo” means either the running taco or the smiling taco. It’s basically their way of saying that customers will get their food quickly and leave satisfied.

“Come visit us, come try us out and let us know if you like it or not,” Gomez said.

The restaurant also has a food truck and also offers catering. 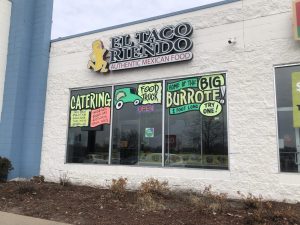