Deep Ellum started early on the weekend last Thursday afternoon. The weather was glorious and many opted for patio tables to enjoy the day.

The historic entertainment district is popular not only for live music and bars, but also as an incubator for Dallas’ culinary scene. In the early 90s, places like The Green Room injected punk rock into the local food scene. And while this trend continues, we recently spotted a small taco window on a side street with spray-painted “Deep Ellum Tacos” on a parklet out front.

Deep Ellum Tacos El Habanero is just a bit off the beaten path and has seating.

If there hadn’t been two other customers waiting at tables outside, we might have thought it was closed; the windows are just dark. But the “Open” light in the window was on, so we started reading the menu.

Deep Ellum Tacos El Habanero’s menu includes street tacos, nachos, tortas and burritos, but it also offers more traditional bites like tlayuda from the state of Oaxaca in Mexico. These are large, thin fried tortillas topped with refried beans and sometimes chapulines, which are also on the menu here (fried grasshoppers, $7 for a side order). It is a popular snack in Oaxaca, especially when spicy. (Could be the protein of the future.)

It took a while to choose from the large menu, but when we were ready we rang the doorbell at the window. A minute later, the window opened. Behind the guy taking our order was a nice kitchen with two cooks on stoves, working large pots. It was a commercial kitchen with the energy of a home kitchen. 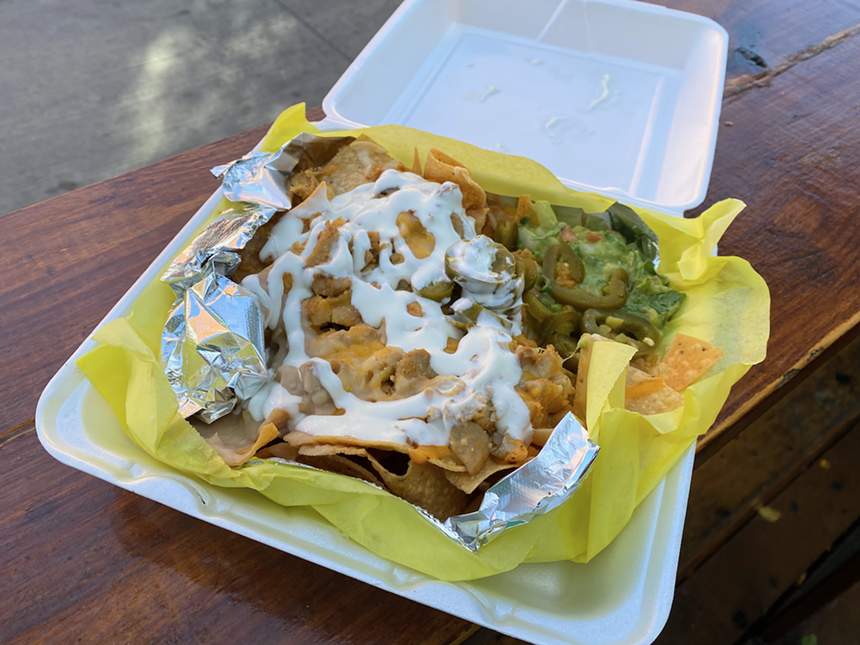 The chicken nachos are served over homemade fries and are enough for at least two people.

We started with an order of Nachos de la Casa ($14.50). A take-out box was filled with homemade tortilla chips, cheddar cheese, chicken and refried beans with the usual sides. We could barely put a dent in these and weren’t too pushy considering we still had tacos and a burrito to work with.

We ordered three steak tacos, served on the street with lime, cilantro and onions. The tender beef was perfect with a bit of spice and the portion size was excellent. The green sauce is hot, though – like burning lips for 10 minutes. Take it easy. The tortillas appeared to be homemade, if not finished on a griddle as ordered. Don’t judge a burrito by its messy pictures. It’s perfect.

Finally, we did everything to finish the Traditional Burrito ($13). After trying the green salsa, we’re glad we didn’t choose the Hot N Spicy option. It was a gigantic amount of food with all the appropriate toppings, which made the toasted tortilla work hard not to explode like a box of refrigerated cookies. This was not the case.

In all, we had enough food for three (maybe four) grown adults for $40. So $13 per person if three – that’s a big deal. All in all, it’s good watered down food, with homemade quality for a very reasonable price in the middle of an entertainment district.

As a bonus, the little parklet is actually cozy and a nice place to watch the crowds from a distance. Plus, Deep Ellum Tacos is open until 3 a.m.

He’s also one of the vendors in the upcoming Tacolandia event and he’ll be offering some of that fare there.